Opposites are an essential building block of the duality that makes your world possible.  In creating the physical world, I/we activated the concept of separation and of opposites. Perfect opposites generate recurring feedback to one another.  The forces of creation meet resistance at the poles as light moves back and forth between them in a criss-cross trajectory. The product of that friction is, paradoxically, that more dimensions or levels of light are generated.

Also, by mirroring one another, opposites stabilize the underlying forces of creation and create a bracketed space–a pause–where material can flourish. Everything physical exists within those brackets and could not exist if they did not.  Physical reality is a daisy chain of being that traces its roots back to the initial inception of duality. This is the possibility that was set in motion when darkness and light were separated in the creation narrative.

As the system changes, the distinction between opposites narrows.  We are entering a time of more androgeny, spiritually.  We will notice more human self-reliance and self-reflection, and less dependence on physical feedback for direction and growth loops.  Love will change from loving things specifically to a more general generic love for wholeness, as the ultimate expression of love.  There will be less emphasis on an individual’s perceptions or experience.  At the highest levels these changes are significant as well, and they are the result of more wholeness and fusion of concepts in abstract realms. The initial threads are now woven into rope.  Broken fragments have been resurrected into wholeness.

Seeing wholeness is a new experience for humans.  As we have explained before, smaller pieces — the fragments — needed to be fortified, made stronger — and this was accomplished through separation.  Now, in coming back together, the new whole can sustain greater pressure.

What is justice and is there a spiritual component to it?

Justice, as conceived of by human logic, is the crust of the essence of justice, the outside layer.  The core act of pursuing justice instantiates order to inherent earth-bound systems, all of which need definition, boundaries, and cohesion.  When justice is performed, all the hidden strands or issues connected to the visible issue also snap into their correct places, into an accurate relationship with one another.

The justice system first elaborated in the Torah sees this, and understands that the purpose of transcendent justice is not to keep order amongst humans.  Justice sets in light and clarity accurate relationships between abstract forces.  When human actors, representing  abstract forces, concretize these relationships accurately by pursuing justice, the entire system reverberates with relief.

Long ago, an eye for an eye was the most immediate effective way to correct rips in the communal spiritual fabric.  It is not possible to carry out this essential form of justice now because we are too remote from our roots.  In this time, unjust actions are not directly linked to areas in the spiritual net which need fixing.

How will the human body, as a spiritual tool, start to change?

The knowledge and light that has been carried by humans but never manifest in creation will start to be pumped out through nodes in the body that have evolved.  There will be a cycle of transfusions between what has been carried on the inside and the ability to lead, which is on the outside.

The small light and the large light are fulfilled and prepare to change places.

Remember there are no outside forces; you are bringing yourself to a deeper sense of now.  You  are choosing, you are creating, you are accessing more of the what that has always been you. You can choose to be an usher, to usher in the new.

What is the role of an usher, one who guides new light into the system?

See the pomegranate seeds, an enormous pile of them;  they represent the scope of the inner work ahead. 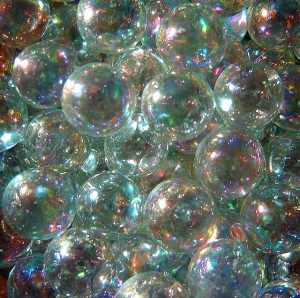 Light, which goes through humans who are aware of it, is transformed by the  passage, and moves out through crystal nodes as a complete spectrum, a rainbow of light.

The discipline of awareness, of using consciousness with intention, throughout the day, is most important.  You will accomplish this by meeting up your self with the purpose of bringing light to everything.  Instead of becoming lost and involved in outside activities, connect yourself to them through clear intention.  It is only important to do things, if when you do them, you also bring light to them.  A lot of practice is necessary here.

What tools do we need to access the new, to become new?

The newly accessible knowledge and energy is not complicated or secret.  It is simple and revealed in a most natural way.  What was concealed is revealed.  What was hard is easy.  What was obtuse is obvious.

For example, the hidden codes of letters and light which are the creative impetus and foundation of each and every thing and being that exists are now perceptible to the human spirit.

We cannot change the code, but we can see it. Changing it would be like trying to change the nature of DNA.  But we can map it and resonate with it.  Everything that exists is suspended by a creative intention … like a pear, in the air.  Human violence, for example, is not supported by this code.  Being right is not a relevant rubric anymore.  In tune or not, our minds are not meant to be the primary tool to achieve wholeness; minds have become over-articulated.

In the days of the temple in Jerusalem, when it was Shabbat, there was a most profound revelation of holiness and light.  I/we could see for miles, I/we could see the temperature of all souls for miles.  And the interface between the divine and these souls, as they kissed, gave them renewed life.

How is human life on the continuum of time, changing?

Life and death are changing places, in the sense of their span and timing.  What was short  (lifespan) is growing longer, what was long (death period) is short.  We are moving toward a long long life span punctuated by short recalibration, as necessary, which is death. 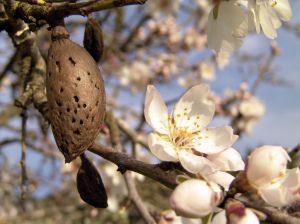 I hear the word almonds.  I see almond blossoms, on a tree,  There is a tree in which is stored the wisdom of the ages.  This is a primordial tree;  it does not exist physically, in a consolidated manner and location.  See this tree. It is made up of the Hebrew word chazak, as well as other words.  It a root and branch system.  There is another tree.  The other tree is silent, untouched, pure.  The other tree is Shabbat.  Of these two trees, one gestates the everyday, the other holds holy time.

I hear “frusta deum” repeating. What does it mean?  It means that people who crave light with their minds pervert both mind and light and destroy the inherent balance in the natural feedback loop of opposites.